how can I trust the bible?

How do I know that what’s written in the Bible is accurate and true?

Not an uncommon question. You’re probably thinking along these lines: “How can you be so sure that the Bible is the Word of God? How can I trust what is written in it? How do we know that what Jesus did, spoke and taught has been recorded accurately in the Bible?” Let’s take a look at some facts with regard to this question:

We have a wealth of historical evidence backing the Bible’s accuracy and authenticity. “The Historical Reliability of the Gospels” by Craig L. Blomberg (Intervarsity Press; 1987) is a good resource for more details on this subject. 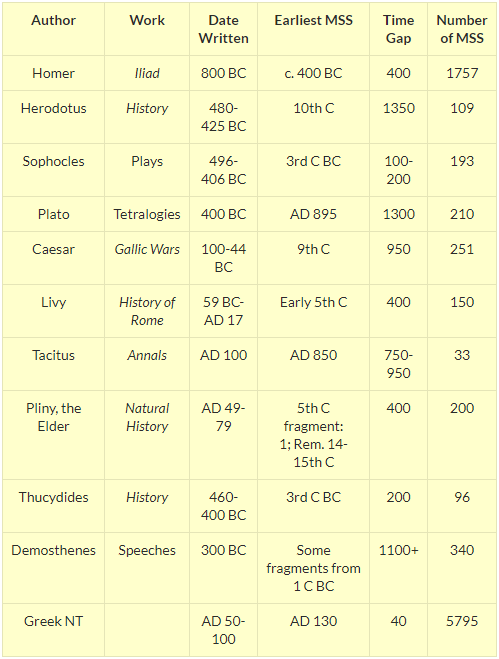 Various non-Christian Roman and Jewish historians include references to the life of Christ in their writings (e.g. Flavius Josephus, AD 37/38-c. 101, a Jewish historian in Jerusalem). These extra-biblical sources mention the fact that Jesus was a miracle worker and that he was crucified. Furthermore, we have a record of 53 Biblical characters confirmed in ancient inscriptions, apart from the Bible. These inscriptions (on ancient tablets, walls of Egyptian temples etc) found at archaeological sites across the middle east confirm the historicity of the Bible, in terms of places, people and dates that correlate externally with the Biblical record.

We have events which were prophesied in minute detail, sometimes hundreds and even thousands of years in advance. The prophetic passages in the Bible (such as Daniel 8 and 9) which accurately predict the names of people, places and dates hundreds of years in advance cannot be accounted for without taking into account the supernatural insight that God has into future events. Below is a table of just 44 of the Old Testament prophecies about the Messiah that were fulfilled by Jesus. The statistical probability of one man fulfilling all 44 of these prophecies, either deliberately or accidentally, is too small to be considered meaningful odds that it could have been anyone but Jesus:

There are “fingerprints” that God has left throughout the Bible: detailed mathematical patterns discovered by transliterating the original text into the corresponding numeric values that each of the letters in the Hebrew and Greek alphabet possesses (for more information on this, see the works of Ivan Panin, such as “Bible Numerics”). Look at these examples (noting that seven is the number of perfection or “God’s number” in scripture):

Furthermore, there is historical, biological and scientific data encoded in the first five books of the Old Testament, some of which has only been confirmed in modern times (“Cracking the Bible Code” by Jeffrey Satinover [William Morrow; 1998] makes an interesting read on this topic, although I don’t agree with all his conclusions).

We should look at the Bible’s internal integrity, to see if it contradicts its claim to being the Word of God. If we take some time to read the Gospels, we will quickly see that Jesus advocated the highest standards of truth and integrity. Jesus said in John 18:37: “For this cause I have come into the world, that I should bear witness to the truth. Everyone who is of the truth hears My voice.” His followers faithfully recorded these sayings under the inspiration and guidance of the Holy Spirit with the purpose of accurately preserving this information for future generations (see 2 Timothy 3:16). Even if we choose for now to exclude the supernatural element involved in ensuring the correct and accurate transmission of the Bible (in other words, God’s direct involvement through the Holy Spirit’s intervention), it is inconceivable that Jesus’ disciples would have written down His call to live truthfully while at the same time lying about His claims and actions – considering that their lives were at stake because they were being persecuted by the religious authorities of the day for the message they were spreading. Surely they would have been corrected by their peers or exposed as hypocrites by their critics if they were spreading lies? We would been left with at least some historical record of such a disparity – yet no such record exists. The eminent Roman historian A.N. Sherwin-White wrote: “Any attempt to reject (the Bible’s) basic historicity even in matters of detail must now appear absurd” (“Roman Society and Roman Law in the New Testament”, A.N. Sherwin-White; Oxford University Press: 1965). Latourelle, on testing the corroborative evidence for events in the Gospels: “On each of the subjects enumerated, we can invoke the testimony of many exegetes. To the extent that researches go on, the material acknowledged as authentic grows ceaselessly until it covers the whole Gospel” (“Finding Jesus through the Gospels”, Latourelle; Alba House; 1979; pp238ff.) We can be certain that what was recorded about the life of Jesus was recorded accurately (at this point, we may still want to dispute Jesus’ claims, but we cannot dispute that these claims were inaccurately recorded unless we throw out the entire written record of all antiquity as inaccurate).

Lastly, we have the collective testimony of millions upon millions of believers throughout the centuries, who have had very similar encounters with Christ and whose lives were subsequently transformed as a result – and this in a consistent, positive and lasting manner. Take note that the Bible speaks clearly of tares (weeds) interspersed amongst the wheat, or wolves in sheep’s clothing, and these will always discredit the gospel message – as we’ve seen with modern “televangelists”. I only mention this because you may have had a “bad” experience of someone calling themselves a Christian. This could have been due to a human weakness rather than malicious intent, or it could well have been a proverbial wolf dressed up as a sheep. But this cannot in itself discredit the work of God in the lives of the countless millions who have a genuine testimony of the transforming power of the gospel in their lives.

Unfortunately time does not allow me to go into more detail here, but please look into these facts to convince yourself of the Bible’s authenticity – don’t just take my word for it.

What about other religious writings?

So what about all the other religious writings out there – don’t they claim the same things? While some will claim divine inspiration, a closer investigation of their claims will show them to be flawed. Take for example, the Eastern religions like Buddhism and Hinduism – it is hard enough to find even a consistency of thinking there. As W.L. Craig writes in “Reasonable Faith”: “We should, then, test world views by their logical consistency and by how well they fit the facts known by experience. In our day and age, however, certain people, under the influence of Eastern mysticism or its Western step-child, the New Age Movement, deny that consistency is a test for truth. They affirm that reality is ultimately illogical or that logical contradictions correspond to reality. They assert that in Eastern thought the Absolute or God or the Real transcends the logical categories of human thought. They are apt to interpret the demand for logical consistency as apiece of Western imperialism. Trying to reason with such people can be very frustrating, because they will cheerfully concede that their view is logically incoherent and yet insist that it is true.” It is of course impossible to argue with such a standpoint, but also equally impossible to find any satisfying answers there, let alone truth.

Take for example, the Hindu scriptures: “The canon of Hinduism is basically defined with regard to what people do rather than what they think. Consequently, far more uniformity in ritual than in belief is found among Hindus, although very few practices or beliefs are shared by all. Many Hindus worship Shiva, Vishnu, or the Goddess (Devi), but they also worship hundreds of additional minor deities peculiar to a particular village or even to a particular family. Hindus believe and do many apparently contradictory things—contradictory not merely from one Hindu to the next, but also within the daily religious life of a single Hindu.” This is not an attempt to knock or discredit other religious texts, but to point out some objective facts that they are wanting either in their internal logic, basic historical details or in terms of corroborative evidence for their authenticity. The Bible stands out as a coherent, historically reliable text. It’s claim to be the inspired Word of God is backed by evidence, not just opinion.

Why is what is written in the Bible important?

All of the scriptures – Old Testament and New – point to Jesus, the Son of God. Jesus is central to any understanding of who God is and therefore any quest to “find” God cannot bypass Jesus. Philip, one of Jesus’ disciples, had a burning desire to see God. He came to Jesus and asked him to show him this “Father” that Jesus was constantly referring to. Jesus’ reply is striking: “Have I been with you so long, and yet you have not known Me, Philip? He who has seen Me has seen the Father; so how can you say, ‘Show us the Father’? Do you not believe that I am in the Father, and the Father in Me? The words that I speak to you I do not speak on My own authority; but the Father who dwells in Me does the works. Believe Me that I am in the Father and the Father in Me, or else believe Me for the sake of the works themselves.” (John 14:9-11) Here we see essentially what Jesus’ mission was: To show us through his words and actions who God the Father is. The scriptures record all of this for posterity so that it is possible for us to discover Christ and God the Father today. This is not an exercise in intellectual superiority to prove that the Bible is “better” than other scriptures, it is merely to provide evidences for the trustworthiness of scripture in accurately presenting Jesus Christ to us.

For more on why and how Jesus wants to relate to us, see here.